Meekison the Mentor: A conversation with a modern constitutional architect 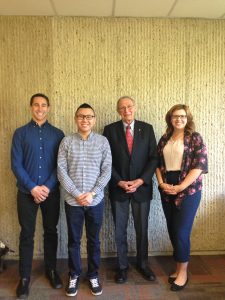 Three summer students from the Centre for Constitutional Centre recently had the once in a lifetime opportunity to sit down and chat with one of the founding fathers of the Constitution Act 1982 – Dr. Peter Meekison.

Meekison is a renowned political scientist, a distinguished professor emeritus at the University of Alberta, and was Deputy Minister of Intergovernmental Affairs during the negotiations that led to the patriation of Canada’s Constitution and the creation of the Charter of Rights and Freedoms. Meekison saw it all as he represented Alberta alongside Premier Peter Lougheed at the patriation negotiations and during the Meech Lake and Charlottetown Accord discussions.

Here are a few highlights from the conversation with Dr. Meekison.

1) Federalism “caught his eye” from an early age.

It may come as a surprise that such a renowned political scientist actually started off his studies in engineering. Although Dr. Meekison says his engineering grades “weren’t the best”, he realized that what he enjoyed most in his undergraduate experience was his involvement in student politics as Students’ Union president at the University of British Columbia. Following his engineering degree, he had a conversation with the “Dean of Men” who encouraged him to try political science. He started a new course of studies in the subject and “got riveted” about federalism. This led him to pursue both his Masters and Doctoral level studies on federalism, eventually becoming an expert in the subject.

In 1964, Dr. Meekison became a professor in the political science department at the University of Alberta. Some of his former students had been working at the newly-created Department of Federal and Intergovernmental Affairs in the province and came to visit him in 1974. When asked about why he switched from the academic world to the governmental, Meekison explained that his former students visited and said: “they don’t know anything about federalism in the department!” and asked him to work with them. He said, “I went for one year. To make a long story short, one year became ten years and I went to all the constitutional negotiations.” In those ten years, Dr. Meekison attended the patriation, Meech Lake, and Charlottetown Accord negotiations.

3) There was a lot of “give and take” during Charter negotiations.

There was a back-and-forth dynamic at many of the constitutional negotiations. Provinces had different goals or certain outcomes that they wanted. Dr. Meekison described one such instance at the Victoria Charter negotiations in 1971, when he was a junior advisor. This was one of the first major constitutional conferences for negotiating a package of changes to the Constitution, including fundamental freedoms, political rights, language rights, and a constitutional amending formula. This conference ultimately failed when Quebec did not agree and other provinces followed suit.

“Bill Bennett was the premier of British Columbia and for a long time they didn’t have anybody on the Supreme Court of Canada from [BC]. So he said to [Prime Minister] Trudeau, I think we should have at least one seat on the Court – Quebec can have so-many, and Ontario can have so-many, we should at least have one guaranteed. So then… Smallwood [Premier of Newfoundland] put up his hand and said “Prime Minister, put me down for one [seat] too!” You watched the give and take happen.”

4) One of Lougheed’s firm stances was for provincial equality.

Dr. Meekison had this to say about Premier Lougheed: “[He], in many respects, was a real visionary, and he was a believer in provincial equality… Some of the smaller provinces like [Prince Edward Island], people didn’t take seriously, but they’re still a province. And they have to be respected. Lougheed worked very hard in making sure that Alberta’s interests were looked after. He was not into first and second-class provinces, we were all equal.”

One major instance in which Lougheed fought for provincial equality was by supporting the Alberta Amending Formula, which Dr. Meekison drafted. This amending formula was meant to apply to any changes to the Constitution, and took away Ontario and Quebec’s previously-held veto power, thus keeping all the provinces equal when voting on constitutional amendments.

5) Where are we going from here? Reflections on Canada 150 and Charter 35

When asked to reflect on what he thought was the most Canadian way to celebrate Canada Day this July 1, Dr. Meekison smiled and laughed. He shrugged a little, paused, and said: “We [Canadians] are a happy people – by and large, Canadians look out for each other. This is manifested in things like equalization, the sharing of the benefits flows in different directions. I think we’re a very fortunate country. Whether you agree or disagree with the Charter, I think the Charter has just revolutionized the country. I think, for the better. I think we’re very fortunate and I can’t think of a better place to live.”

Meeting with Dr. Meekison allowed the students to attribute a face, smile and personality to a father of patriation. In talking about his experiences with the constitutional negotiations, Dr. Meekison said multiple times that they “had a lot of fun” and that everyone, regardless of the province they came from, worked well together. The conversation made the students think about how there are differences across Canada with respect to where we come from provincially, but the Constitution continues to bind us together as a nation.

Stay Up to Date

Protection of Privacy – Personal information provided is collected in accordance with Section 33(c) of the Alberta Freedom of Information and Protection of Privacy Act (the FOIP Act) and will be protected under Part 2 of that Act. It will be used for the purpose of managing CCS’ email subscription lists. Should you require further information about collection, use and disclosure of personal information, or to unsubscribe, please contact: Administrator, Centre for Constitutional Studies, 448D Law Centre, University of Alberta, Edmonton AB, T6G 2H5, Tel: 780-492-5681, Email: ccslaw@ualberta.ca. You may unsubscribe from our email lists at any time.